Beyond the Pelton Lane road bridge at the west end of the junction was the vast array of sidings at Stella Gill where coal trains would be marshalled for journeys up the line to Consett (trains for Consett would reverse out of the sidings over South Pelaw Junction and then move forwards up the incline to Consett) and to the rest of rail network.

As well as the junction, the sidings connected to a series of inclines (the two closest to Stella Gill being Waldridge Incline, which ran next to William Street in Pelton and Eden Incline part of which, including Pelton Level shed, is now Roseberry Grange golf course near Grange Villa) that brought coal from the local collieries as far away as Waldridge near Chester-le-Street.

With the closure of the local collieries, the sidings lost their reason for being and, by 1970, had been lifted with the exception of just a single track (previously No 3 Incoming Road) remaining and all of buildings, with the exception of the NCB shed and the bridge, which carried a footpath and a gas main, demolished.

The complex of sidings, of which there were 36, were controlled by Stella Gill Flatts Signal Box, close up photographs of which are few and far between but, courtesy of Keith Hoult, here are a few images:

The photo below clearly shows the lines from South Pelaw Junction in to the Stella Gill sidings complex.  The lines were named and numbered from left to right as follows:

As I mentioned earlier, the whole site has changed substantially and nothing demonstrates this better than the 2009 Google Earth image to the right.

The NCB shed is clearly visible at bottom left at the East End Bridge at South Pelaw Junction at the top right showing that area where the sidings were is now completely covered in trees which are a major challenge to try and navigate through in search of remains!

The route of the Consett line can be seen curving away to the top right and the lines towards other local collieries are visible towards the bottom left and clearly visible is the large residential development that has taken place in the area since the closure of the local collieries in the late 1960s.

Today, the whole ‘valley’ that the tracks ran in has been filled in such that the bridge next to the signal box is now at ground level and, due to the growth of vegetation it is all but impossible to take pictures from the same positions today as evidenced from the photo above…

There is no trace at all of the signal box and only the large NCB building in the background remains, some pictures of which, in it’s current state, can be seen further down this page.

Besides the bridge which is still used as a footpath today, the NCB shed whilst, for the most part, derelict, is still used (as of December 2013) for storage purposes by at least one local fertilizer business.  The only other visible remains are some of the fence posts that can be seen in the last photo of the signal box above.

As mentioned earlier, the land under the bridge that spanned the sidings was filled in and the bridge, whilst still carrying a footpath no longer spans anything and remains, as I understand it, only because it supports a gas main which can be seen in the photos below.

Prominent in the photos of the signal box above but equally visible in all photographs of Stella Gill looking from South Pelaw is the NCB shed, one of the largest buildings on the route, the end of which is visible in the photo to the right taken in 1966.

One of the few buildings on the route that remain, the pictures below show the NCB shed as it was on 30th November 2013 and 9th April 2014.

It is, as you would expect, derelict and has attracted the attention of the local vandals and graffiti artists.

Alongside the shed was the ‘valley’ that the Stella Gill sidings ran through.  This has been filled in and now looks like this:

In the third photo of the signal box, at the top of the page, there is a fence running from the left centre, the posts of which are still standing today:

This is the site of the large building in the background of that same photo, part of Stella Gill Coke works.

Not much to look at but there is track still remaining at the site as shown in the photo below:

The inset track, which is between the NCB shed and the line to Consett could be the last piece of track still in-situ between South Pelaw and Consett and is the middle of the three tracks behind the shed shown on the map section below: 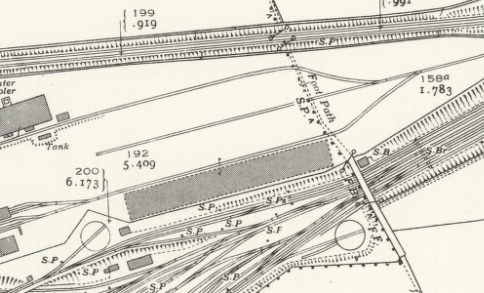 As of December 2014, British Gas are digging up the area around the NCB shed which has uncovered some railway related pieces including the concrete sleepers in the following photographs:

This site uses Akismet to reduce spam. Learn how your comment data is processed.