Another location where, apart from the route of the Coast to Coast cycle way, there is very little trace of the railway, particularly the station site, the trackbed of which, as can be seen from the Google Earth image on the right has now been partially built over with new housing with St Ives Gardens now occupying the station site.

The photo below shows what is left of the trackbed with the Jolly Drovers pub behind the camera and the new houses a little further up the line round the corner in the distance:

Next, the Jolly Drovers pub.  The line used to pass in front of the pub through what is now the carpark on an embankment and a bridge that took the line over the road in the foreground albeit that has also changed since the line ran over it.

Compare the image above to the one here: http://www.derbysulzers.com/37058leadgate84.jpg to see what a huge change this location has undergone (the chimneys of the pub are just visible in the background).

The remains of the embankment that took the line over the road (this is to the left of the Jolly Drovers in the picture above):

The site of the station has been built on with St Ives Gardens now occupying the site.

Further up the line towards Consett at the end of Leadgate Front Street is a fairly substantial plate girder bridge carrying the A692 road.  It is my understanding that as of March 2014, the bridge is scheduled for demolition and the site around it has been cleared of trees which would allow access to heavy machinery.

Update:  Demolition of the bridge was due to start in September 2014 but has been delayed as bats have been found nesting in it and, I understand, the contractor brought in to oversee the work has gone in to liquidation.

Update 3: A full year after the bridge was due to be demolished, it is finally coming down:

A video of the demolition of the bridge and construction of the new road can be found here.

Just prior to the bridge was Bradley Crossing which lead to Derwent Colliery and Medomsley colliery, the old track bed of which can be seen heading off on the right hand side of the photograph below:

One more indication of what used to be there, a couple of concrete sleepers lying in the grass next to the bridge:

In between Annfield Plain and Leadgate, at East Castle opposite Pontop Pike, is another of the art installations on the line, this time a pair of sculptures called ‘The Old Transformers’ by David Kemp.  The pictures below were taken on 12 October 2014.

Commissioned in 1990 by Sustrans and Northern Arts, they use redundant machinery from numerous heavy industries including coal mining, ship building and steel manufacture across the North East.  They look from East Castle in the direction of the site of Consett Steelworks.

Some more pictures can be found here on the artist’s own website: https://www.davidkemp.uk.com/industrial-giants/

The Transformers are next to the bridge below which carried the line over the road from Pontop to Stoney Heap.

The same bridge in March 1984 with the Last Passenger Train to Consett: 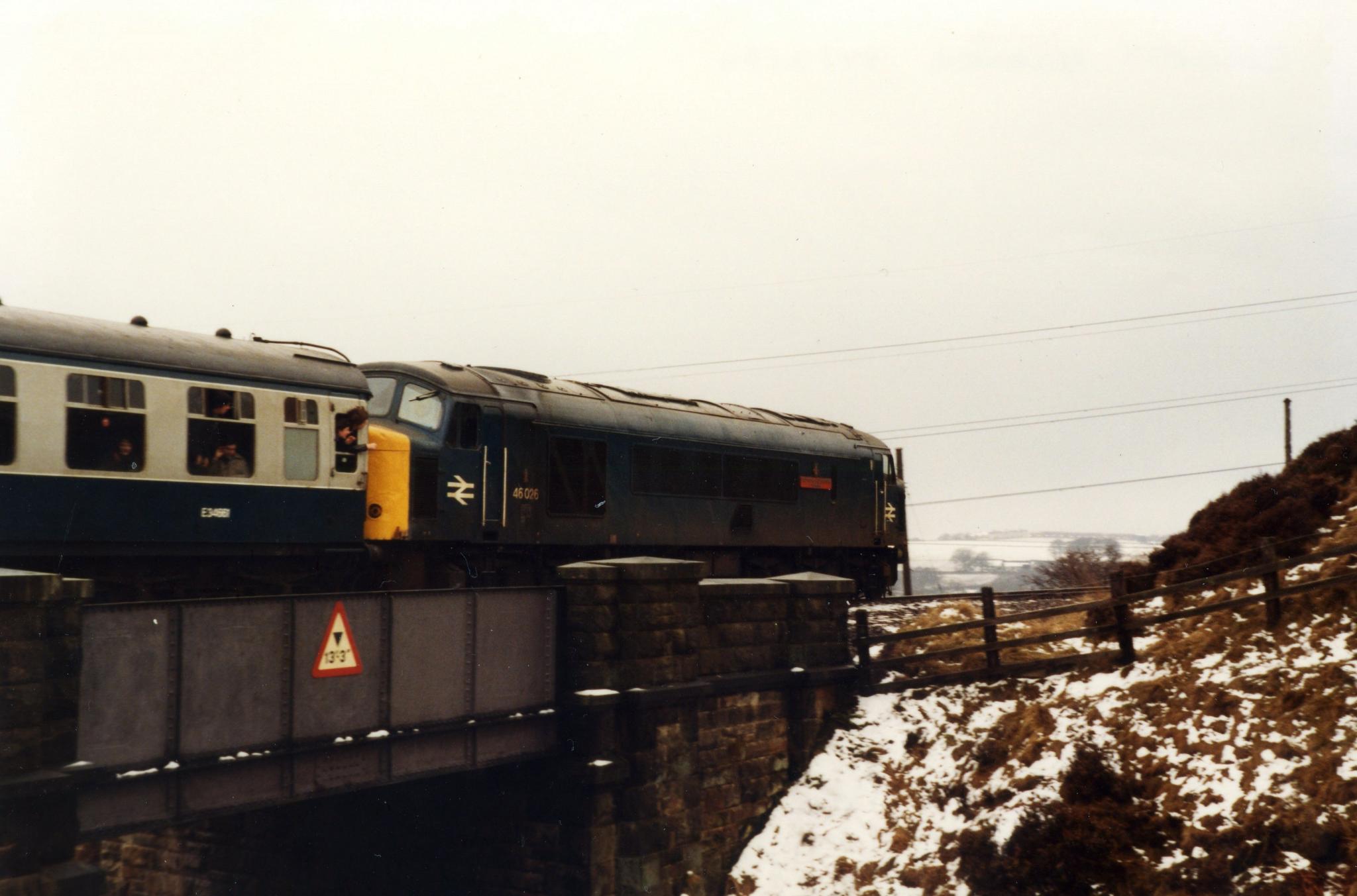 46026 at Pontop just outside Leadgate on the way to Consett with the last passenger train. Photo Copyright Neil Young

A little further up the line towards Leadgate are two piles of discarded concrete sleepers.

At Brooms Church is a subway taking a path under the railway.  The small bridge for this subway is still there with the following two photos showing it in February 2015.

For a look at what Leadgate and East Castle looked like when the railway was still here, click here.